Sérignan is a lovely, quiet and traditional little town in a prime location near the Orb river and a few miles from the sea, Béziers and Spain.

The town is a hive of life staging events and markets all year round. Classic architecture, modern art, vineyards and the fabulous Mediterranean coast come together in harmony in Sérignan: a town with four sides to it with its plain, marina, old town and shore. Dive into the fascinating heritage as you wander around its old town along pretty lanes bearing old signs in Occitan.

Walk, ride a horse or cycle along the 4km sandy beach: the Natura 2000 Orpellières nature reserve embodies the creation and evolution of the Mediterranean. Its sustainable building project has made it a haven for flora and fauna, which you can learn all about on a trip to the Visitor Centre. It’s an all-you-can-see buffet of “art de vivre”!

Sérignan beaches and their unspoilt natural settings are the best in the area, no question! Lungfuls of sea air, a sprawling dune belt and the Mediterranean as far as the eye can see…

Things to see and do in Sérignan

A listed Historic Monument since 1907, the Languedoc Gothic-style church has three naves and a 30m high bell tower. Don’t miss: the three bells ringing to announce the Sunday service. At the end of the choir you’ll find seven high mullioned windows, which include stained glass from the Mauvernay workshop, installed in 1879.

the Visigoth font and also the little door in front of the choir where you can access the tombs of former church canons (around 40 buried inside the church).

People in the know call it the MRAC. But it’s not just art connoisseurs who will enjoy these 2,700 square metres of bright gallery space, which are entirely devoted to collections by well-known and often prestigious artists, from the 1960s to modern day (Daniel Buren, Hans Hartung…).

Paris has its Buren columns in the Place du Palais-Royal, and Sérignan has its own version around La Cigalière concert hall: an installation of 170 openwork metal structures which are lit on the inside by fibre optics and take on an infinite variety of colours. That’s why the installation is called the “Parc Rayonnant”.

Deep in the Orpellières nature reserve in Sérignan-Plage, the Visitor Centre is a tourist information and educational site introducing visitors to its many facets and environmental issues in the area: the amazing species of flora and fauna, the history of the Orb, the site’s vinegrowing past and the function of the wetland and dune belt.

Events and classes available in July and August.

Between 1994 and 1999, the Montenegrin artist Miodrag Djuric known as “Dado” (1933-2010) took over a disused vineyard warehouse on Les Orpellières beach. He created a huge mural and some “sculpture-objects” that tell his own story as well as the history of the Balkan wars. A powerful testimony to man’s degeneracy. Tours available on European Heritage Days in September and guided tours throughout the summer.

Open during the European Heritage Days in September.

The feast of Saint-Roch in Sérignan

On 16 August, Sérignan celebrates Saint Roch, the town’s patron saint. In the 14th century, Sérignan was saved from the ravages of the Plague by the townspeople’s prayers to Saint Roch, who is invoked against epidemics as well as being a protector of animals. Look out for the parade of townspeople with their pets and horses, which they bring to be blessed. 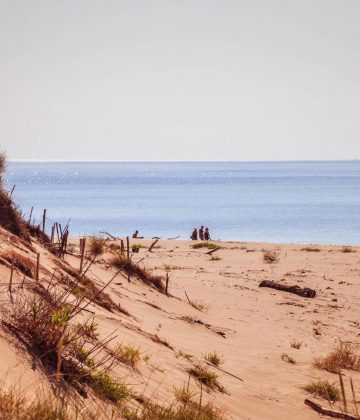 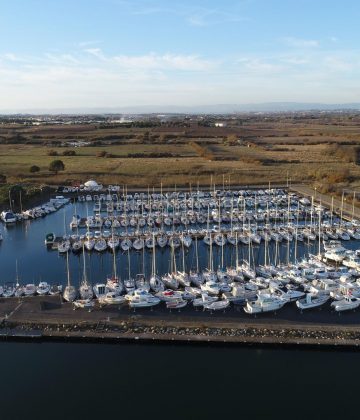